Harvey Specter is the epitome of cool. From the sharp suits to the killer one-liners, the top shot lawyer knows how to steal the show.

Unless you have been living under your sofa for the last few years, you will know about the hit USA network show ‘Suits’. For those that don’t know, let me quickly walk you through the premise of this amazing time zapper. Take one of New York’s biggest and most powerful law firms, a quick fire, no nonsense, know it all lawyer by the name of Mr Harvey Specter (‘The best closer in New York City”) and a smoking hot female boss, Jessica.

There you have the scene set for one of the best ways to spend an evening. Are you all still with me? Good. Jessica tells Harvey that now he is a senior partner, he needs to get an associate. Reluctantly he holds interviews and in stumbles a kid running from the police with a briefcase full of Marijuana, Mike Ross. Mike is a misguided, super brain, whizz kid. A photographic memory at its finest. Don’t believe me? He made money during college by taking the New York bar (which he has memorized) for other students. Mike is no lawyer and has never been to law school. Specter hires him as his associate. And so the story begins, will they find out? Wont they? What will happen next as they knock down every legal case that dares to oppose them?

Now that we’re all on the same page, why is Harvey so cool? Well let me tell you just a few reasons.

2. He always dresses the part, and by part I mean finely crafted bespoke suits. His sartorial attire is something to be marveled. It’s always a given that each and every time, razor sharp is on the roster. He understands that from the minute he walks into the room he owns it before he speaks. It is a battlefield out there and when you arrive in a bespoke suit that says you mean business, then everybody pays attention. “Win your battles before they’ve been fought”. The way you look is where it starts with respect to others, the way you think is where it starts in respect to yourself. Take it seriously.

3.He doesn’t take no for an answer. He knows what he wants, understands what he can get away with, and the rules of the game.

4. He has honed his craft. When you are good at what you do, not only do you move and talk with an air of confidence but also people (most importantly your peers) respect you. We can go on for while why this character is so cool, but for now enjoy these few (we may come back with a part 2). 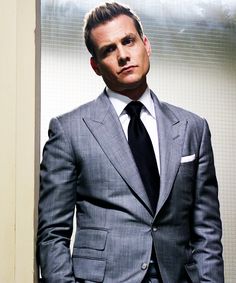 Now at Morts & More, we can’t make you think like a winner or be cool, but we can without a doubt make you look and feel it.

One thought on “What Makes Harvey Specter So Cool? His Suits?”